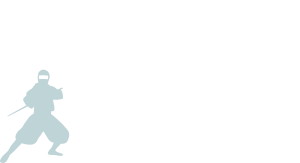 Hello, we had an extremely hot summer in Japan this year, but these days, the temperature
has dropped significantly. I’m not a big fan of summer’s heat and glare so I would practically live like Dracula during my summer holidays. When I was a college student, I use to lock myself in a dark cool room during the day to only come out at night. After I started working, I could no longer avoid going out during the day but this summer I was mostly working from home. It has been a very comfortable summer altogether.

Well this time let’s tackle the subject of whether or not there are Ninjas or Shinobis in today’s
Japan. What do you think about it? In my past blog I told you that Shinobis did exist in Japanese history. But how about now? Actually, the opinions are divided among Japanese ninja fans.

Firstly, let us consider the Shinobi (the historical figure) apart from the Ninja (its fictional
depiction). Do Ninjas really exist now? We could easily answer this question with a no. Ninjas were created in novels, Kabuki, etc. Originally, the term Ninja refers to a fictional character depicted in many anime, video games, movies. It’s therefore safe to say they did not really exist.

What about the Shinobi then? Does it exist now? In my personal opinion, there aren’t any
Shinobis nowadays. During the Sengoku period (1467-1603) Shinobis were hired by warlords to collect information, infiltrate enemy territory, setting fires, vandalizing, ambushing and attacking in the dark. In the Edo period (1603-1868) civil wars ceased. The Shinobis’ duties included surveying various regions, guarding feudal lords, guarding gates and patrolling castles. Their official duties stopped when the Tokugawa government ended in 1868. Shinobis returned to occupations that could use their skills, like farmers, police officers, fireworks specialists, doctors, etc.

Shinobis found their use and means of existence in an unstable world at war. Currently there
are no open conflicts in Japan nor participation in foreign wars. Compared to Sengoku period when war occurred frequently, the need for Shinobis to collect information and sabotage has decreased drastically in modern times.

Nowadays there exist, however, people who collect information and engage in sabotage all
over the world: spies. Shinobis and spies are very similar. Today, the intelligence agencies in which spies operate, such as the CIA, SIS, SVR and MSS exist all around the world. In Japan, the Cabinet Intelligence and Research Office, the Defense Intelligence Headquarter, the National Police Agency Security Bureau, The Public Security Intelligence Agency and the Intelligence and Analysis Service of the Ministry of Foreign Affairs are regarded as intelligence agencies. However, in Japan there is no global standard espionage agency as the above cited agencies are not prepared to operate at risk.

What’s the difference between a spy and a Shinobi? The decisive difference between the two
is the use of Ninjutsu. Ninjutsu is a survival technique based on the comprehensive knowledge that the Shinobi learns such as invasion, destruction, martial arts, disguise, communication, dialogue, memory, transmission, occult arts, medical science, pharmacy, plants, comprehension of atmospheric phenomena, astrology, use of black powder, etc.

Some of the Ninjutsu, such as communication, dialogue, may still work nowadays. However, most of it does not find a suitable application in today’s world. For instance, the Tsubokiri
(坪錐) a tool for punching holes in soft walls made of soil is too weak for modern buildings.
Goshikimai (五色米literally five colors rice) is the use of dyed rice which combination creates
signs to communicate with your allies. Basically, it was a mean to communicate and convey
information in an era without the internet. Today, mobile phones and the internet make it easy to communicate in real time all over the world. Shinobis were also good at using firearms. But the black powder that Shinobi used produced a lot of smoke and was terribly noisy, as there were no silencing devices. No wonder modern spies don’t use ninjutsu, a 500 hundred years old technique, anymore.

Therefore, it cannot be said that there are Shinobis today on the basis that intelligence
agencies exist in Japan and in the world. Incidentally, it wouldn’t be accurate to call today’s spies Shinobi.

Today there are people in Japan who have inherited and train in Ninjutsu. Can we call them
Shinobi?
That’s a question for my next blog.
See you soon!